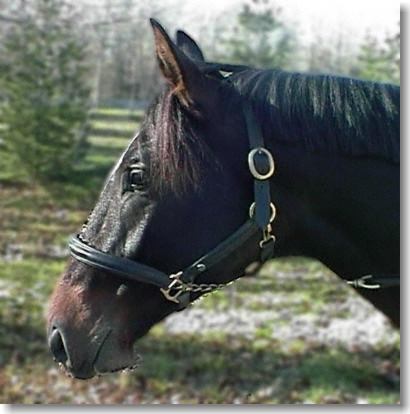 This athletic colt is by the 1996 100 Day Test Champion, Amor Reto, and out of the Hanoverian mare, Esteem. Amor Reto’s pedigree includes proven performers in jumping and dressage. Esteem’s pedigree contains three famous Hanoverian stallions, Ferdinand, Duellant, and Senator. Both Amor Reto’s and Esteem’s pedigree include the Hanoverian sire, Denar, who brings together the Duellant and Senator lines. Of Amor Reto’s sons, this colt is the one whose athleticism, temperament and looks remind us the most of his dad. He also reminds us of Amor Reto’s brother, Arrakid. We think he will develop to be like Amor Reto, an excellent jumper and riding horse. At the ISR/Oldenburg Foal inspection in 2000 he scored 8.0 for confirmation & type, 7.5 for movements, and 7.5 for Overall impression for an overall score of 7.5. We expect to send him to Ron Liming to be started in a couple of months. He was started last year and we have been riding him lightly this year. We will be working basic gaits and steering through this summer.

In October 2004 we took him to a schooling show and he got a 2nd place in Training Level Test 4 with a 61.15%. His maturity is allowing him to make very nice progress with this training.

After spending so much time with Apollo we have ramped up Achim’s training. Andi has been taking Roman and Achim to clinics with Natalie Lamping. His natural athleticism has made his progress look much easier than other horses.

He finally has turned the corner and is doing 2nd level work. It looks like we will take him to a show later this Summer or early Fall.