Atmon was shown as a jumper and used in the Maryland Hunt. He has unique bloodlines carrying Thoroughbreds Adlerschild xx and Poet xx on the sire’s side and the famous Hanoverian stallions, Duellant and Senator on the dam’s side. Denar was a three quarter brother to the German Champion Diplomat, and carries the bloodlines of two classic Hanoverian stallions, Duellant and Senator. His breeding approval was based on his performance in the 1983 Middletown Horse trials. He has many successful offspring but his most famous is Amor Reto who won the 1996 100 Day Stallion Performance test. He was retired from breeding in 1999 but here is an old flyer. 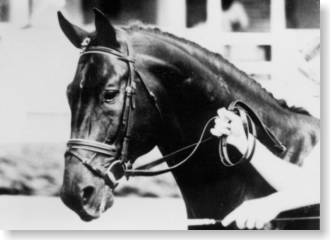