This colt is by the Dutch stallion, Hierarch. Hierarch who has already established himself as a leading producer of dressage horses in Holland is now in the United States. In between his breeding duties he is being shown by a young rider at Prix St. Georges. Hierarch’s sire, *bleep*tail, was the top producer of dressage horses for the Dutch for 2002. 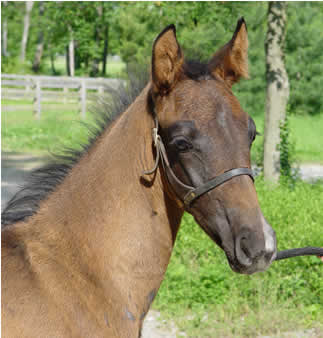 The mare is by the great Dutch stallion Roemer. Roemer’s sire, Pilatus, is the sire of two great Westphalian jumping stallions, Polydor and Pilot. Roemer started his career as a jumper but became the leading producer of USDF Horse of Year dressage horses in the United States. Iron Spring Farm still keeps a brochure on him.

He is off to be started with Ron Liming. We expect him back in a month or two. He is ready to do some work.

Whimsy is progressing nicely. Andi thinks he has grown another inch. He is a hotter horse than his buddy, Concerto.

Whimsy is back from Ron Liming and has been integrated into our training program. Andi and Matt think he could be a cute hunter/jumper. I think he will be a nice dressage horse. He has nice gaits.