This colt is is by the 1996 100 Day Test Champion, Amor Reto, and out of the premium ISR mare, Bon Temp Roulez. Of all the horses we have bred to Amor Reto this colt is the one whose looks and temperament are most like his dad. He has three nice gaits. We are going to keep him a stallion a little bit longer.

According to the USDF 2000 Stallion Stats, Bonjour, has sired five USDF Horse of Year horses. His dam’s dam, Walküre, competed in dressage at Prix St. George.

We have been reluctant to geld Apollo. He continues to be the best stallion prospect we have seen by Amor Reto. We started him in the spring and everything continues to go nicely. It would be easier on us if he screwed up. Considering how much we know about the stallion test I am not sure why we are doing this! The stallion test is long, hard, and expensive. The big farms and foreign stallions have a definite marketing advantage. I took these photos when we asking a local expert for a second opinion. Now we are going to spend some money and prepare him for the stallion inspection. 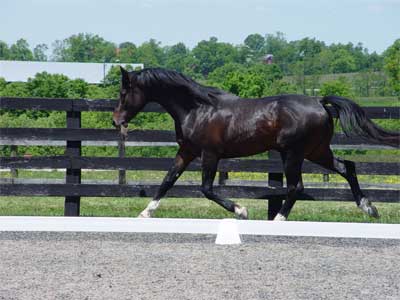 Here is a picture of Apollo trotting. We are considering nominating Apollo for the stallion test. He has a good gaits and personality. This three year old stallion is by our stallion, Amor Reto, and out of the premium ISR mare, Bon Temp Roulez. Considering how much we know about the stallion test I am not sure why we are doing this! The stallion test is long, hard, and expensive. The big farms and foreign stallions have a definite marketing advantage. I took these photos when we asking a local expert his opinion. 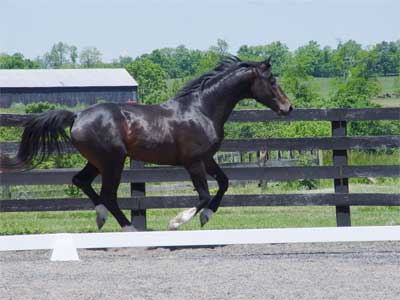 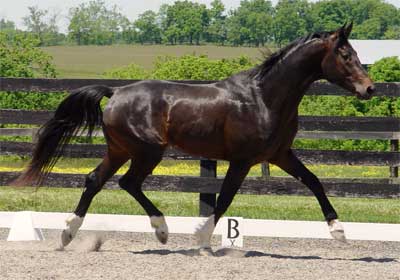 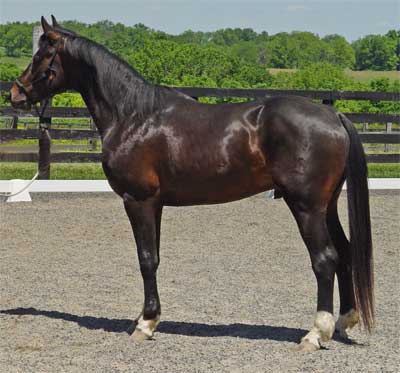 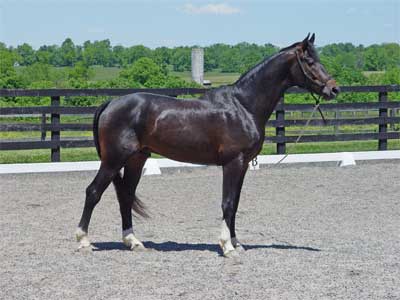 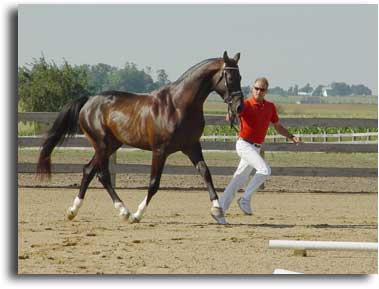 Here is a picture of Apollo being presented by Helmut Schrant at the stallion inspection. We sent Apollo up to Helmut a month earlier to prepare him for the test. There were nine stallions at the inspection and only one was accepted, Pandorra. Pandorra was accepted based on his performance in dressage in Europe. All of the young stallions presented were very nice. Many of them had very nice pedigrees and some could really jump. Ken Borden had five young stallions there. In the end none of the young stallions were accepted. Despite a very nice job by Helmut preparing Apollo, Apollo was not accepted. Apollo will now move on to happier life as a gelding. Although we would have liked to have a horse at the stallion test again, we are grateful in a way. The stallion test is expensive and can be nerve wracking on the owner. Owning and promoting a stallion in America is a very tough business to make money in.

Spring 2006 – Results of Apollo in the four year old test! 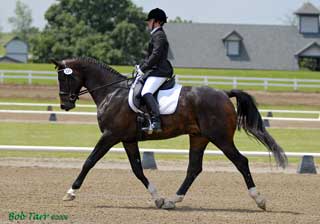 Andi has been competing Apollo in the 4 year old test and has done moderately well. The good news is that she has her two qualifying scores for the Nationals. The bad news is that the top two horses are really good! Here is a nice photo by www.BobTarr.com. Click on the link below to learn more about the competitors and to see a few more photos.

It is official. Apollo and Andi are in. In the last couple of weeks Andi had resigned herself to the possibility that their scores were just not good enough. We both were amazed that 46 horse and riders across the U.S. that had applied for the Four Year Old Dressage championship. Over 120 horse and riders applied in the three divisions! We knew that all of the horse and riders are good and only the top twenty were going to get invited. So wish us luck! If you are in the area and curious about these up and comers in dressage, the 2006 USEF/Markel Young Horse Dressage National Championships will be held at the MSEDA Dressage at the Park show, Lexington, Kentucky, September 8 – 10, 2006.

We sent Apollo back to Rood and Riddle for surgery on his hocks. Evidently they missed something the first time.